Gender and the City – Berlin – Tempelhof…

Saturday was a very sunny day to conduct our exploration in Tempelhof Berlin. 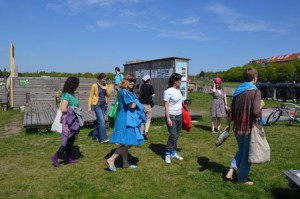 We were curious.  Tempelhof, a former airport transformed into a park since 2008, is a very exceptional site in Berlin’s Neukölln neighborhood. 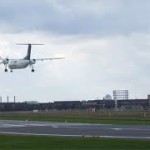 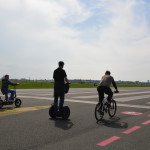 A place where utopia is still possible, where experimentation takes place, building, gardening… expressing oneself… All these ingredients we, at Genre et Ville, are eager to learn from.

Who invested this free land and how?

Our first impression was an incredible sense of space, some of us said « it is like being at the beach » the fresh air, the horizon so far away… 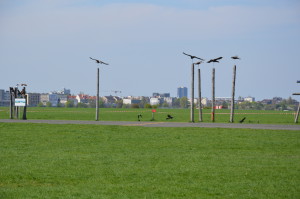 The first installation we visited was the community garden.  Open, welcoming, the word « TRUST » was adopted as a key word to discribing this space. 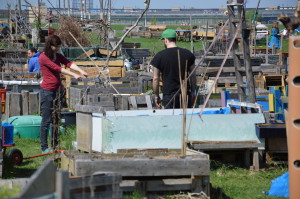 In terms of who occupied the space our first feeling was balanced, may be more females, but we weren’t sure… so we counted.  After all there were twice as many female individuals as there were male.

This number seemed to stay constant when we visited another community garden in Kreutzberg « PrinzessinnenGärten ».  However, the interesting point is that in both cases when it came to communicating about the garden, men took the lead (as you can see in the videos linked below).

It was the case as well when it came to building things! 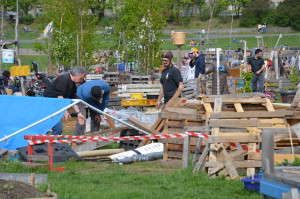 Overall we felt, with some dose of utopia, new living environments tend to foster a more balanced state of equilibrium with respect to gender issues and differences.

This is a very interesting issue in the course of our research.  And in fact, Tempelhof may not be playing this equilibrium for long.  The pressure to use the space for creating more appartment buildings, or equipment of many sorts is strong.

And with city planning taking over utopia, risks of old habits coming back are important.  For instance, as we roamed the streets of Berlin, whenever we saw « public equipment » such as sports arenas or skate parks, they were solely occupied by men, or boys.

Openess, freedom, seem to be key in finding some sort of gender and equality balance.  When a space is not trapped in a specific destination it seems to provide room to outgrow habits and stereotypes…

We shared the same feelings as we explored the rest of Tempelhof.  The runways, the fields, were occupied by a very mixed crowd (gender, class, ethnicity, age).  We did notice that men still had a tendency to operate the barbecue in most cases!

But when it came to experiencing new modes of transportation, challenging oneself, gender differences in the « undesigned » Tempelhof environment seemed to be less of an issue. 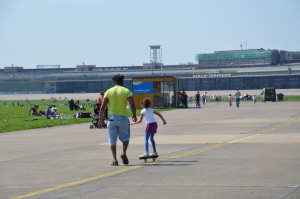 So it came as some sort of a surprise when we ran into a team of (almost exclusively male) cyclists preparing for a race.  All of a sudden they seemed so « foreign » in this environment, and in many ways, they were.. 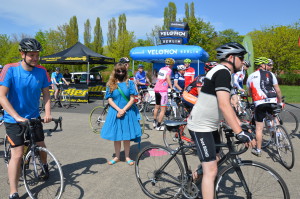 Tempelhof was indeed very special on this sunny saturday, where stereotype had become the exception and not the rule…

But again, we were only watching …