The Funambulist is a digital and printed bimestrial magazine dedicated to examine the politics of space and bodies. It was created by Léopold Lambert, a trained architect turned writer and editor and started in the form of a blog in 2010 augmented by a podcast in 2013. The magazine itself started in September 2015 and a new issue dedicated each time to a specific topic is published once every two months since then.

Issue #6 of The Funambulist is dedicated to urban furniture and planning.

THE FUNAMBULIST
Issue #6 Politic of Space and Bodies
A bench is a bench is a bench?
By Pascale Lapalud and Chris Blache, founders of the think and do tank Genre et Ville
When addressing issues of gender mainstreaming in our city planning and furniture design fieldwork, we often get the same answer from urban planners and city administrators. “A bench is a bench and has no sex!”
Although one can hardly argue with this statement, we intend to show how gender is largely excluded from the conversation surrounding the way our cities are planned and furnished. Even when gender is considered, this is often to serve a purpose that has little to do with equal rights or freedom.
Our research points that, though benches and other urban furniture may be designed for everyone, most of it is used by men. This raises many questions regarding the legitimacy and right to occupy public space and furniture, as well as the real goals animating the politicians and city planners who manage the come and go and leisure of city inhabitants and users. 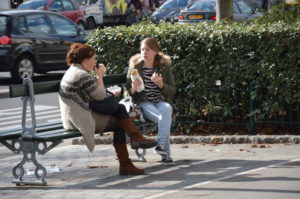 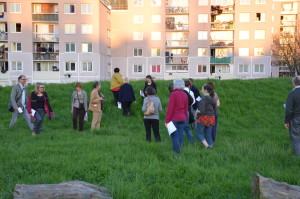