GENDER AND THE CITY 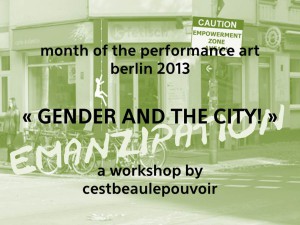 GENDER AND THE CITY

During a five-day workshop, urban designer Pascale Lapalud and sociologist Chris Blache invite interested participants to investigate the public space of Neukölln from a gender perspective. Taking their starting point from the fact that the city is for the most part male created and male occupied, the aim of the workshop is to look at new strategies for female players within the city space.

CestBeauLePouvoir in collaboration with workshop participants will present material collected during the five-day Neukölln case study using the mediums of sound and video recordings, photos and drawings. A parallel workshop took place in the 20th arrondissement in Paris this spring and the discussion will revolve around an examination of the differences and the similarities between the two neighborhoods.

“Crossing Contex Neukölln” is curated by the Danish artist Camilla Graff Junior and is based in the neighborhood of Neukölln. The program examines the notion of “interventions through artistic research” and will run from 2013 until 2015, finalizing in a symposium.
The 2013 edition presents a series of eleven works by artists and activists from Denmark and France: Allio –Weber, Boris Azemar, Bailly Blo and Layla Torres Mollerup, CestBeauLePouvoir, Christine Dilmi, Giraff Graff, Magda Mrowiec, Sara Hamming, Ellen Vestergaard Friis and Vinyl Terror and Horror.